This is my first DIY Arts & Crafts Blog Post. Yeah - finally. I've done a lot of arts and crafts before, especially with the kids, but never documented it. This is the first project where I finally managed to take some photos. For my daughter’s birthday, I wanted to do something on my own - just for her. She's in first grade now and has started reading on a serious level, so I decided to create a reading nook in her room. I wanted to make a cozy space where she would be encouraged to snuggle up and read a good book. Originally, I only wanted to do a small corner, but I ended up with reorganizing the whole room. My priority was not to spend a lot of money buying all new stuff. I decided to use as much of the stuff that we already had in the house as I could, and it turned out to be way easier than I thought. Other than the furniture and decorations that she already had in her room, I added an unused baby crib mattress, a shelf from my office with some cute storage boxes, and some Christmas lights. The only things I did end up buying were some pink mattress covers, lots of screws, paint, and some wood in order to raise the bed and create a little more room underneath. 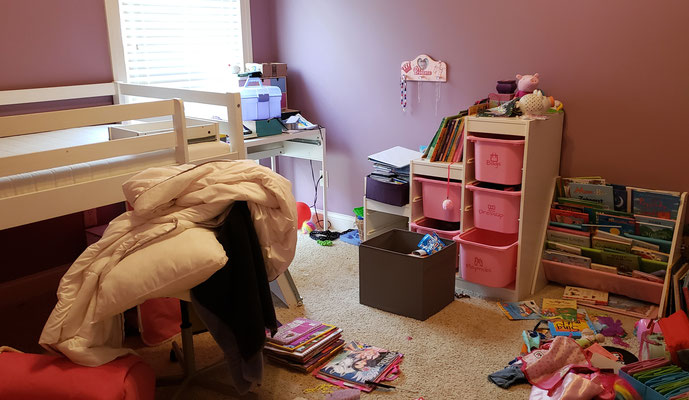 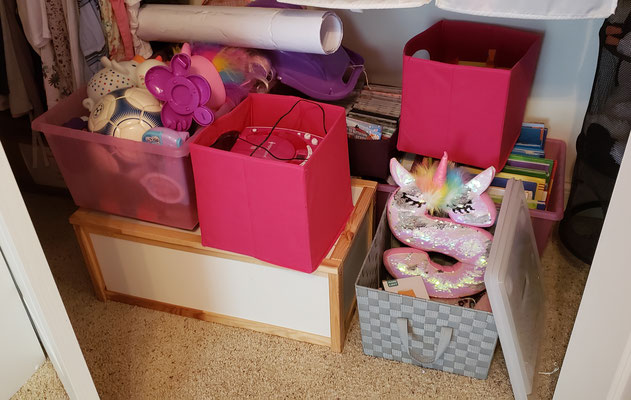 On the first day, which was composed of tasks that I originally thought would not take more than an hour or two, I just sorted and cleaned everything. I feel like I decluttered a whole house. There were so many old books, games, and toys, that I ended throwing one half away and migrating the other half into her brother’s room. What was left in her room was packed into boxes and tucked away in her closet. And abracadabra it looked muuuuuch better after that! 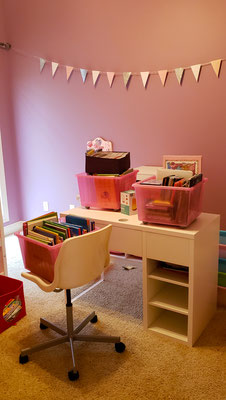 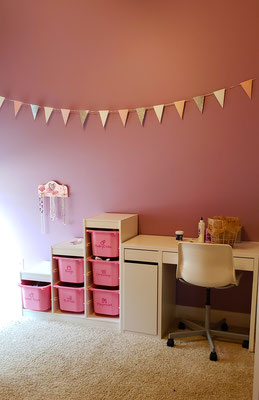 In order to help her keep her room clean and tidy, I labeled all the boxes on her shelf with signs and descriptions, so it would be easier to see what goes where later. I cut the stickers out with my Silhouette Cutting Machine and stuck them onto the boxes. Dark pink on light pink definitely matches if you have a 7-year-old girl 😊. 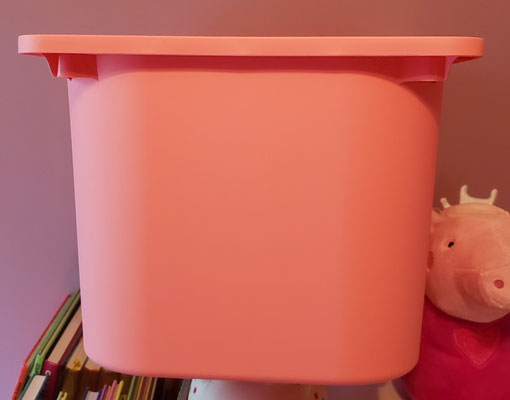 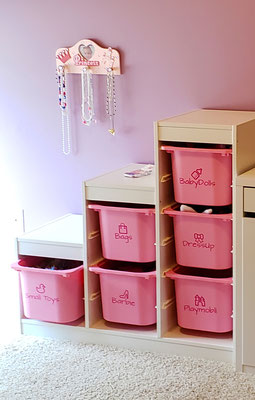 The next step required my husband because I definitely was not going to be lifting a bed alone. We went to Home Depot and bought four very thick beams (9x9”, 3’ high) to lift the bed up ca. 1.5’. Additionally, we bought some boards to connect the beams with one another in order to give the whole construction a little more stability. It might sound easy, but it took us 2 days to finally have everything set up. Finding where the beams should be best connected to the bed, drilling holes, going back to the store to buy longer screws, more nuts, and more washers, all while trying to entertain two kids (definitely the hardest task), made a seemingly simple task drag on.

First, we turned the bed upside down, adjusted the beams, drilled the holes for the screws, and painted all the wood white so it would match the white bed. After that, we put the beams and the bed together and connected the boards with the beams for more stability. We fixed the old ladder with some wood glue. 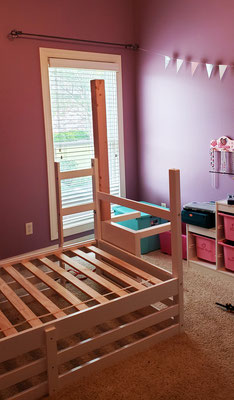 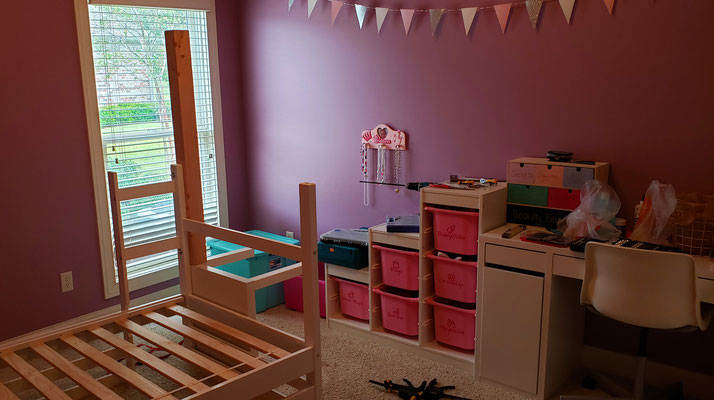 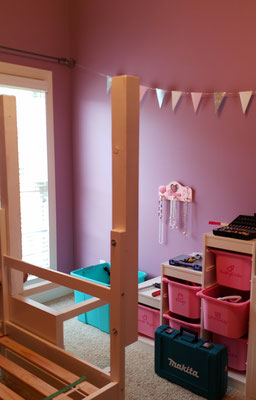 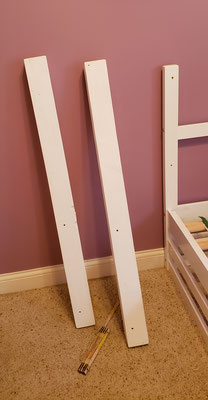 Now for the fun part:  DECORATING!  I love to decorate everything. Making things beautiful is a very satisfying task. I love bringing together all the small pieces in order make my vision a reality.

I pinned the old string of Christmas lights around the bed, draped her old bed canopy in the room under the bed in front of the lights, and put the baby crib mattress with the new covers in one corner underneath it. My dad sent some pillows and a magic light (which is a pretty cool bedside lamp) for her as a birthday gift. For the wall behind the desk I found an old wall decal I ordered when we moved into the house but never used it (honestly, I don't know why). 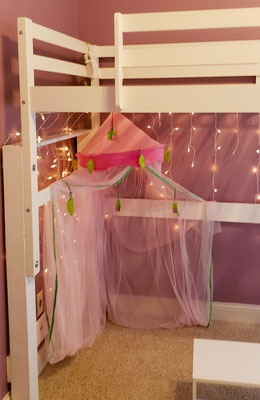 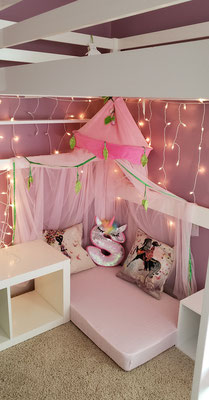 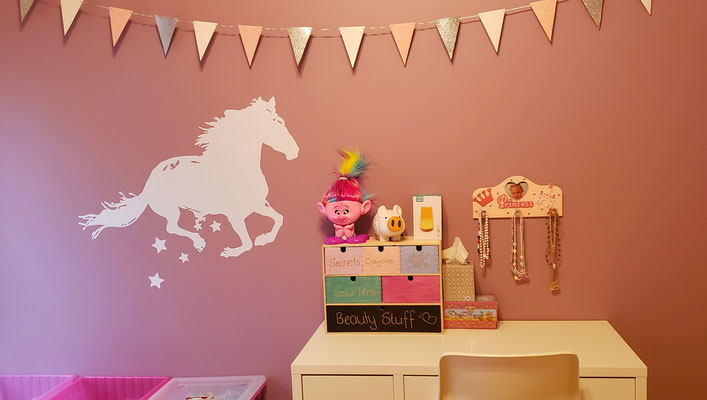 There was only one final problem left to solve: How does one get up on this now very high bed? The ladder we were using before was too short and not stable enough to be used. Then I remembered seeing an Ikea hack on Pinterest for loft beds. We put her shelf with the pink boxes next to the bed to be used as stairs, but even then, it was too low. So, we used another Ikea shelf from our office under the original shelf and our problem was solved. We had the perfect stairs! For safety reasons, we connected all the furniture and later added some anti-slip traction tape with glow-in-the-dark stripes. I then unpacked all the boxes and put everything where it belonged. Done! 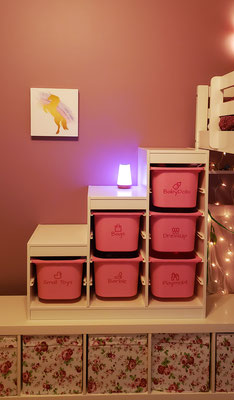 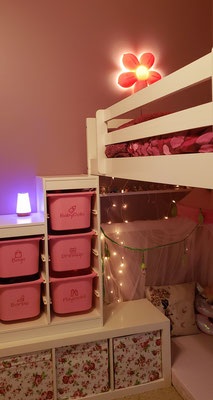 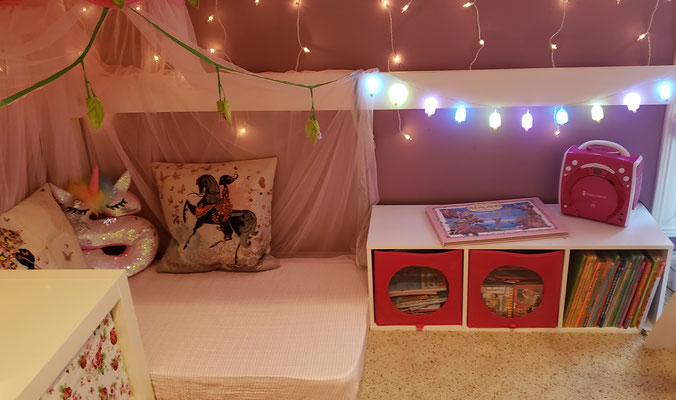 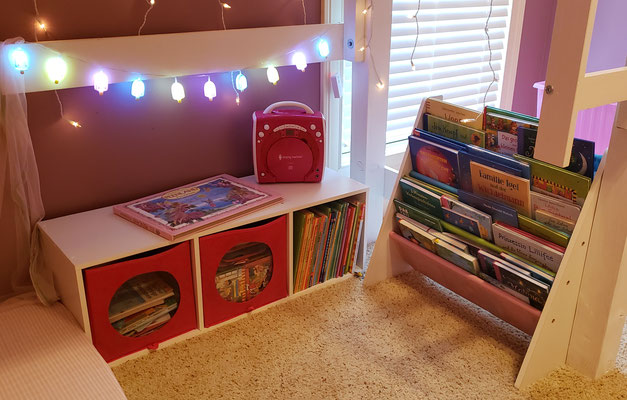 And at night it's even more lovely ♥

We really made her a big surprise. She loves her new room ♥